Wooga (now a part of Playtika) is a well-established mobile game developer and has been in the casual gaming industry for 10 years now. As a leader in their field, they have built their business on creating engaging stories that transport players on epic adventures. At the heart of each game is a gripping character-driven narrative, and their portfolio includes such hits as June’s Journey and Tropicats, as well as, games like Pearl’s Peril and Diamond Dash that continue to grow in popularity.

Pearl’s Peril is one of their biggest hits and has been played by millions since its release date. The game was launched over 6 years ago and is continuously attracting new adventure fans. The hidden object game has an intriguing story that transports players directly into the roaring 1920s. Together with the main character, Pearl Wallace, players are invited to solve mysteries, play hidden object scene games and travel all over the world.

With Pearl’s Peril having been around the block for a while, and with having had surges in popularity throughout its lifespan, it’s only natural that some players have lapsed over the years.

Wooga wanted to minimize that churn and launch a campaign to re-engage those lapsed users and get them excited about Pearl’s Peril all over again.

A new feature had been getting those inside the Wooga office very excited. Iris’s Eyes – which represents a new playing mode where players can find objects by matching their silhouettes – was one of the biggest game features released during the last three years. And it gave Galina Fedulova, Product Marketer at Wooga, an idea.

Could this new feature hold the key to reengagement?

Would promoting this new feature help bring back lapsed users? How would this impact new users’ behavior?

Centering a new app store optimization (ASO) strategy around this feature posed three challenges based on what is known about user behavior already.

1)    User behavior differs greatly between the App Store and Google Play because the assets shown to users when they land on the product page is different. Both stores need separate testing and will most likely require separate creatives.

2)    New users and lapsed users might behave differently based on the way the assets are shown to them in the app stores. We need to optimize for lapsed users without adversely affecting the install rate of potential new users.

3)    Pearl’s Peril is a character-driven game and brand identity is tied to the central character of Pearl Wallace, but the new feature revolves around a secondary character. If the secondary character is featured prominently, will that dilute brand recognition in the app stores for new users?

To achieve her goal, Galina decided to use StoreMaven – the leader in the ASO creative testing space.

She knew that StoreMaven could gather all the data she needed with which to make informed and unbiased business decisions.

StoreMaven’s testing platform allows for methodical testing in both the app stores, as well as being able to test against differentiated audiences.

Their expertise and extensive insider knowledge meant that StoreMaven would be the perfect partner to consult with regarding her hypotheses. Together they designed and executed an informative, statistically sound test series. They would also be able to maximize a limited testing budget under tight deadlines by closely monitoring tests and closing underperforming variants with their proprietary StoreIQ algorithm.

Importantly for this campaign, they would be able to segment audiences and serve each different audience an accurate replica of what they would see in the real app stores. Being able to identify, target, and correctly drive new and lapsed users to the right stores was crucial to getting the results Galina needed to create a plan for the re-engagement campaign.

StoreMaven tests would be able to isolate which assets would resonate with each audience and how to combine these proven assets together in a way that would maximize re-engagement and new user installs concurrently.

First, change the icon, the most visible asset in any app store — one that is shown to both browse and search users, to all new and lapsed users, in all stores, across all audience groups — and see whether that would have a significant positive change in conversion rates (CVR) across the board. This test would also allow analyzing how users interact with the stores by monitoring their activity in each store page before installing or dropping.

Second, take the highest converting icon/s in combination with new creative assets and see how they test across segmented new and lapsed audiences, to see if different audiences have different results.

H0: The control will perform better because it has stronger brand recognition. 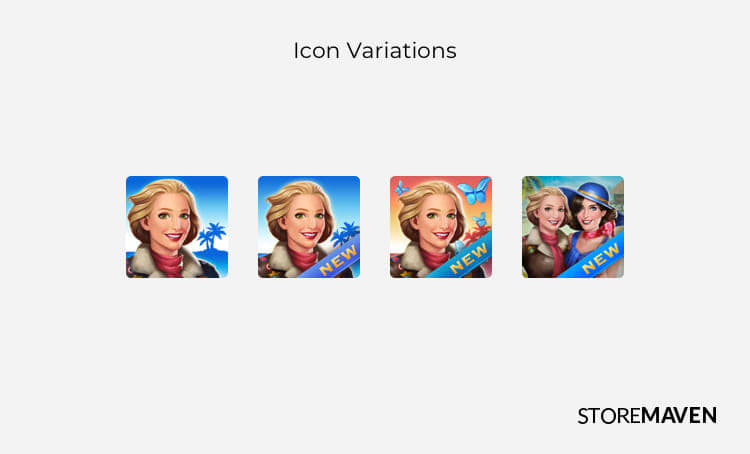 The test showed that users mostly behaved indifferently to the variations, but 2 insights stood out and helped focus the second stage, namely:

The 3 icons that had the highest CVR (although no significant difference in CVR between them) were selected for the next stage. They would be paired in combination with other Iris’s Eyes-centered assets to assess what the overall effect on CVR would be.

Five different combinations of creative asset variations were selected for these tests. The new set of creative assets were tested against two separate target groups: new users and lapsed users to break down user behavior. 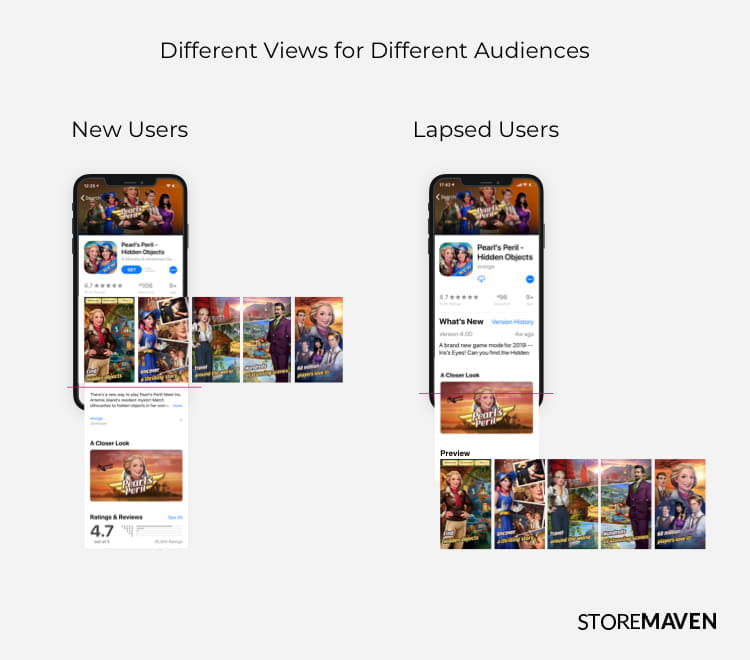 Due to StoreMaven’s ability to track, not only installs but user activity on the app store testing pages, StoreMaven were are able to identify how users engaged with the new creatives. The knowledge of what the user journey was before installing or dropping gave us added insights into which combinations might best serve our needs.

The verdict was in:

In iOS, for lapsed users, the variation that featured Iris’s Eyes elements in each tested asset had the strongest performance and best conversion rates. CVR increased by 5-7% compared to the control. For new users, the control had the highest CVR for new users.

In Google Play, both new and lapsed users responded positively to the same variation — the one with all assets featuring Iris’s Eyes’ elements — with an uplift of 4% for new users and a 2% uplift for lapsed users.

This meant that updating all assets on the iOS App Store created a risk for the new users, as the test showed a slight decrease in installs for this target group. The potential cost of those lost new users was a vital insight. Sacrificing one audience for another carries a high cost. To mitigate this risk, we decided to implement the highest converting combination, updating the icon and the Closer Look video, but keeping the old screenshots. It still provided a better CVR for the lapsed users, but at the same time, there was no significant decrease in installs for the new users. 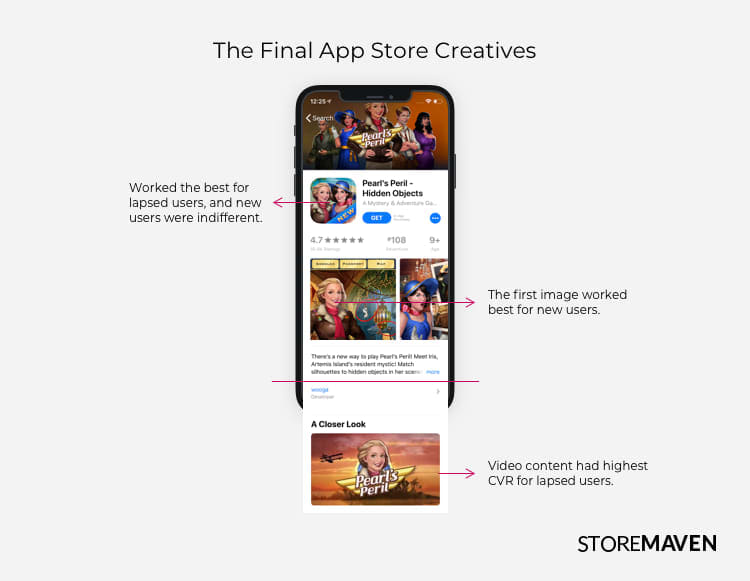 The ability to not only test between creatives but to also assess user activity in the stores meant StoreMaven was able to uncover a layer of data that could not only identify but quantify, differing user behavior. Armed with this knowledge and understanding of exactly how and what those differences were, Galina and her team were able to predict behavior and make informed decisions.

The campaign not only helped re-engage lapsed users but has had other positive ASO victories for Galina and Wooga. Since Galina implemented the new creative asset set, Pearl’s Peril had seen extensive featuring in the App Store, across several geos. 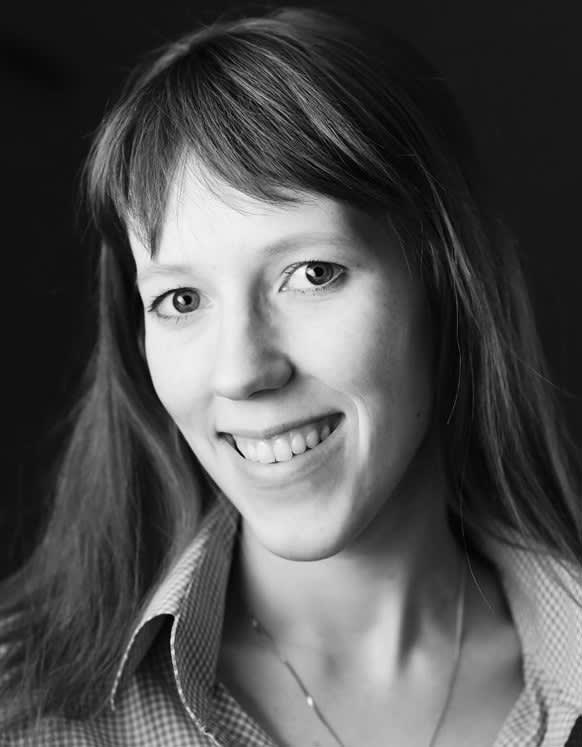 StoreMaven is an AI-powered mobile marketing intelligence platform and is the world leader in App Store Optimization. StoreMaven invented a new market for App Store analytics and testing, which is now growing rapidly. They transformed how top mobile companies like Facebook, Uber and Warner Brothers optimize their marketing performance on the app store by testing how different audiences engage with their creatives and messaging. Through this, they gained access to a treasure trove of data, built close relationships with top grossing mobile companies, and attained unmatched domain expertise on how the app stores work.