In the app store ecosystem, User Acquisition (UA) and App Store Optimization (ASO) teams always have one goal in mind: mobile growth. And this means the constant acquisition of new quality users. To do that you have to understand what marketing and UA efforts cause quality growth and which levers to pull. And herein lies the major challenge.

Measuring installs should be easy. It should be one concrete number. Alas, nothing is that simple when it comes to the black box of the app stores. UA and ASO teams need to measure and report on their respective achievements and core KPIs and need a finite install number in order to do so. ASO teams concern themselves with discoverability in the app stores and organic performance whilst UA teams are mostly concerned with paid channels and return on ad spend (ROAS). Therefore, install metrics (and their respective organic/paid breakdowns) are vital but one needs to make sure it’s the right install metric, the metric that makes sense for their needs. They are not the same, and they shouldn’t be.

Let’s look at the Apple App Store specifically to break it down.

App Store Connect provides data on ‘app units’. An app unit is the total number of users that clicked ‘get’ in the app store, from any placement in the store or from the product page itself. Attribution companies count installs as the total number of users that successfully downloaded and opened the app on their phones. It’s obvious that app units and installs are then entirely different numbers. ASO teams need to concern themselves with app units, UA with installs.

On the web, a lead can be tracked and traced throughout the entire funnel. When it comes to the app stores though, Google and Apple prohibit tracking of the user journey. You can track leads until they get to the app stores and then poof, nothing. That nothing created an entire industry of attribution companies that seek to solve the paid UA attribution problem.

Now UA and ASO teams want to go further than just a sum total of installs and want to be able to connect those installs to marketing and UA efforts in order to track success and monitor the viability of these activities. Correctly attributing a converted user to its source is what allows UA and ASO teams to measure and report on their successes.

That’s where attribution companies step in. They solve the paid attribution challenge using fingerprinting technology and unique device identifiers to track and match users that were directed to the app stores from a specific ad. 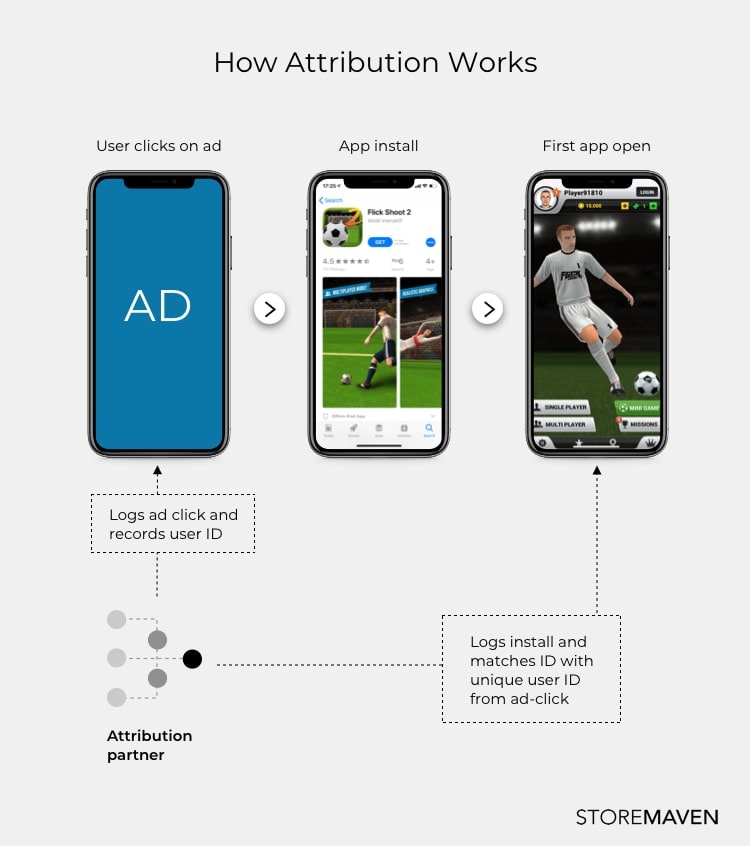 While attribution vendors definitely achieved a major breakthrough by using this technology, there are several problems that make it hard to truly measure installs, attribute conversions and distinguish between organic and paid installs. Attribution platforms can only measure and attribute a user once they have installed and opened the app, meaning all installs where the user came in through UA but didn’t open the app will be labelled as organic. But organic in this context is just a catchall for ‘can not be attributed’ and isn’t entirely accurate. To truly understand what drives organic installs you need to understand what obstacles exist in the attribution pipeline and general strategies. We’ll take a closer look at the three most common challenges come from focusing on the wrong metrics, misattribution, and cannibalization. Because after all, acknowledging the problem is the first step in finding a solution.

All these obstacles really create a picture of how challenging it is to measure mobile growth. While it is meant to enable you to measure your marketing and UA efforts, accurately attributing installs to marketing efforts is still incredibly messy. The real question then appears to be, “why bother?”

The simple answer is that measuring some of your efforts is better than measuring none of them. Most UA teams use a ‘k’ factor to account for misattributed organics but it’s all still fairly assumptive. As they base their conclusions for future plans on past insights, many UA teams fall into the trap of making decisions and crafting strategy off direct ROAS instead of true ROAS, the potential for mistakes are around every corner.

In order to achieve the ASO goals of increasing organic installs, app units (not installs) is the number that ASO teams need to be mostly concerned with. Any success in keyword optimization and rankings within the stores are calculated according to the app stores’ algorithms. Whilst the black box is real we know that one of the most important variables they use is app units.

Now each team is concerned with their own goals and use the metrics that best help them achieve them, encouraging bias and skewing of data further. Thus in one company, you have one team lauding app units as the best metric and one team lauding attribution-based installs, creating internal confusion potentially resulting in conflicting strategies. The truth lies somewhere in between those two metrics.

Check your blind spots then hit the gas

There is no magic solution that can truly consider and correctly attribute installs to their related efforts but by breaking down the problem you can find useable, actionable ways forward. Start with these first two necessary steps.

Firstly, get your ASO and UA teams talking to each other, be vigilant in removing potential conflicting strategies. Acknowledge the problems of what’s standing in the way of you making the right data-driven decisions.

Secondly, create a better framework for arriving at data-driven decisions of where to focus your resources (both time and budget). Make sure you’re using the right metrics for the right scenarios. Continue to monitor your attribution platforms and stay on top of the latest innovations coming out of the attribution sphere.

These current challenges might not have easy solves, but better monitoring can help to at least improve and support a better system in the future. Now that you’ve identified some of the blind spots and challenges that abound in measuring mobile growth the next challenge we all face is how to make sure we’re collecting the right data, to begin with, and carefully monitor it over time.

Our next instalment in the measurement series will dive deeper into this issue, so more on that another time.

Audience Testing: The Smart Way to ASO
Staying Ahead of the ASO Testing Curve: Why the Top Apps Test & Keep Testing