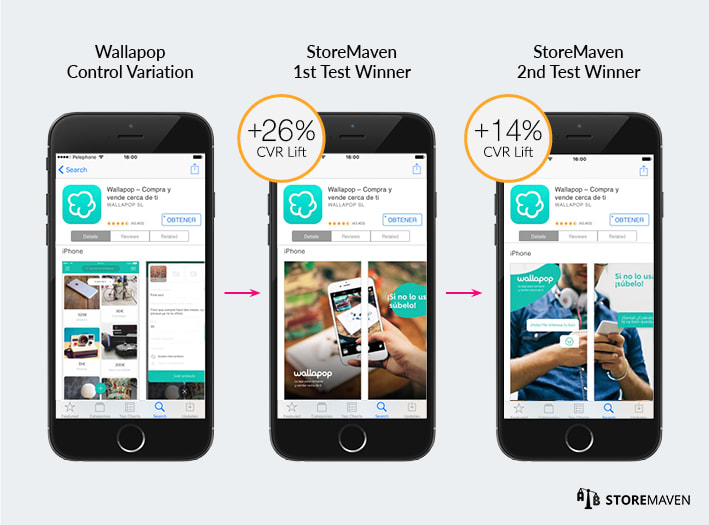 “With StoreMaven, we have learned how to optimize app store installs from our organic traffic”

Wallapop is a mobile virtual flea market/classifieds app where users can buy and sell used items in their area. It is the leader in the Spanish C2C mobile, e-commerce industry and recently merged with LetGo to penetrate the U.S. market.

Everyone lands on the same App Store Product Page regardless of how they got there (e.g. organic traffic, cross promotion, and paid traffic). However, users behave differently before deciding to install or leave a Product Page. One of the major takeaways we have gained from analyzing how more than 500 million users behave on the App Store and Google Play, is that we can classify users into two distinct groups based off their behavior patterns. 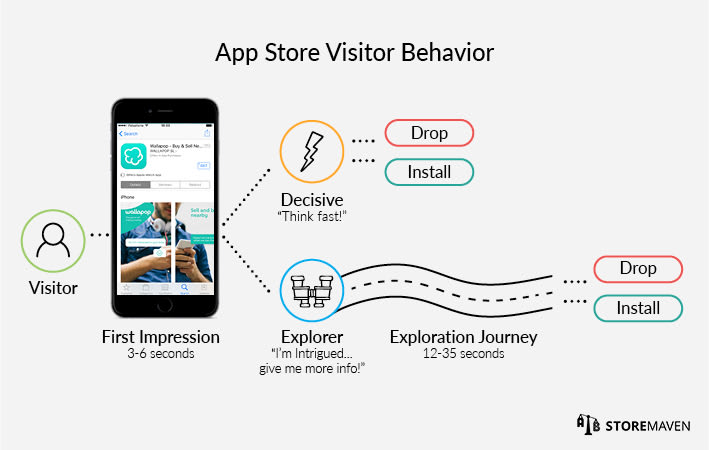 As depicted above, these two user groups include: 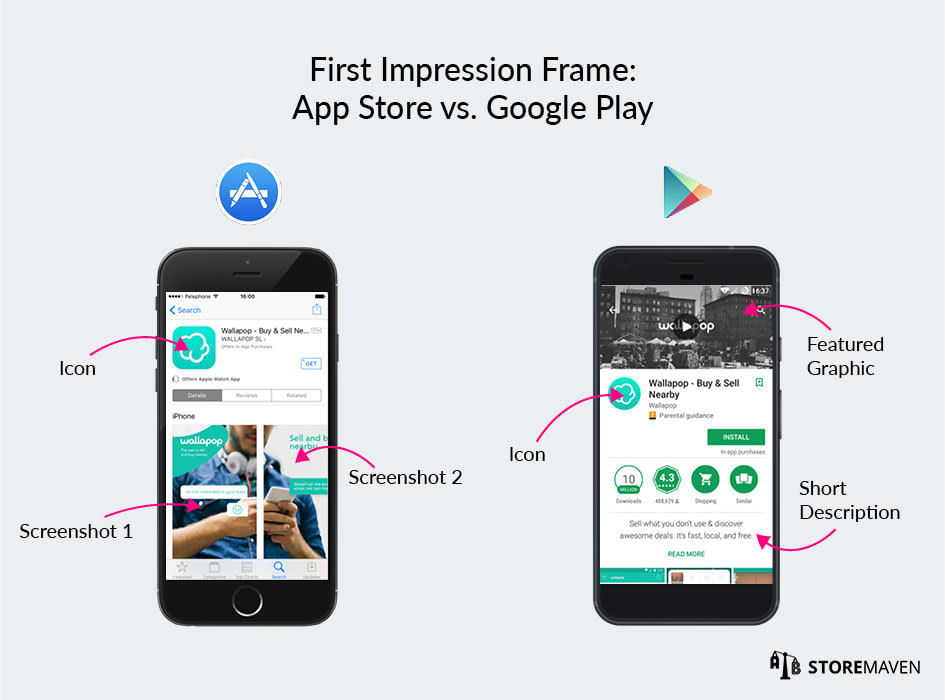 Since we were focusing our optimization efforts on Wallapop’s Apple App Store Product Page, we knew that redesigning the First Impression Frame with a focus on the Gallery would boost conversions.

The goal of our first test was to enjoy a quick win by completely redesigning Wallapop’s App Store Product Page based on best practices we have compiled from analyzing the behavior patterns of millions of App Store users. 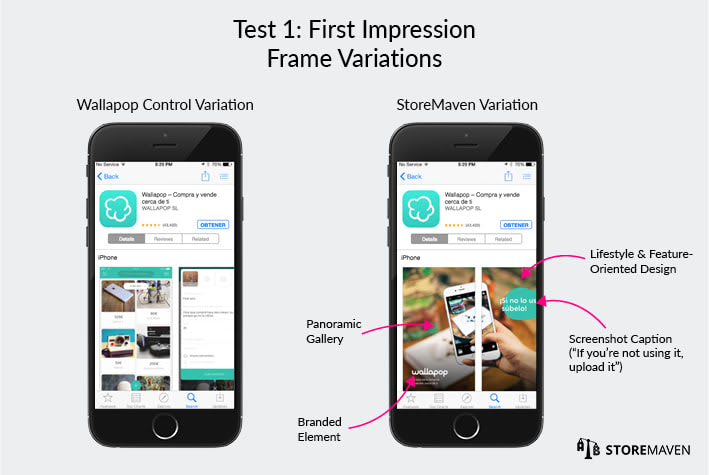 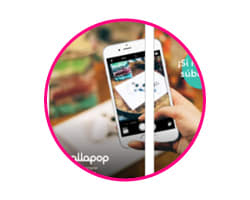 Screenshots are the most impactful asset in an App Store Product Page. We classify screenshots into three overarching types: feature-oriented (direct screenshots from within the app), lifestyle-oriented (images with real-world elements such as people engaging with their cell phones, outdoor settings, etc.), and art-oriented (images that are illustrations and not screenshots or real-life images).

To better convey app utility and raise interest, we decided to utilize a hybrid design of lifestyle and feature-oriented aspects. 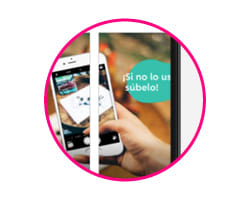 We decided to incorporate a caption that reinforced the messaging of the design (e.g. “If you’re not using it, upload it”). 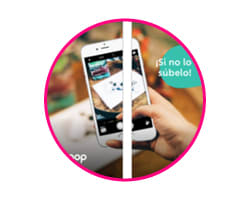 A Panoramic Screenshot Gallery is often used to encourage users to scroll through the Gallery set. Panoramic Galleries provoke curiosity as visitors naturally want to see the “entire” image.

We decided to utilize panoramic Gallery images for the first two screenshots to create a holistic First Impression Frame that encouraged Gallery engagement. 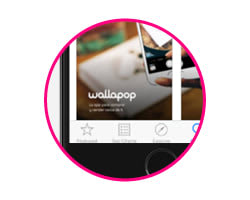 One of the most important factors in App Store Marketing is designing marketing assets that speak the same language as a company’s brand. One way to achieve this is by incorporating a brand’s logo and/or colors from a brand’s palette.

We decided to incorporate Wallapop’s logo and colors in the Gallery assets in order to communicate and reinforce brand identity. 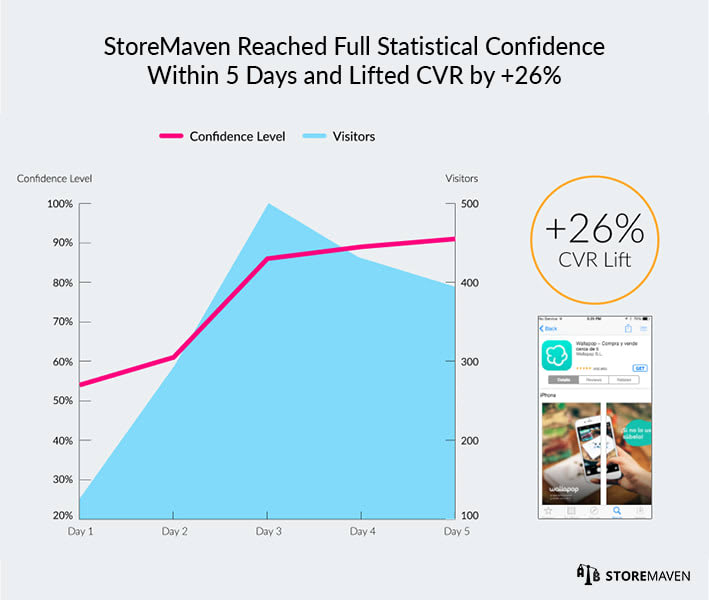 Within 5 days, we were able to reach full statistical confidence in the winning variation. The StoreMaven variation created a +26% CVR lift and became the new control for our second test. 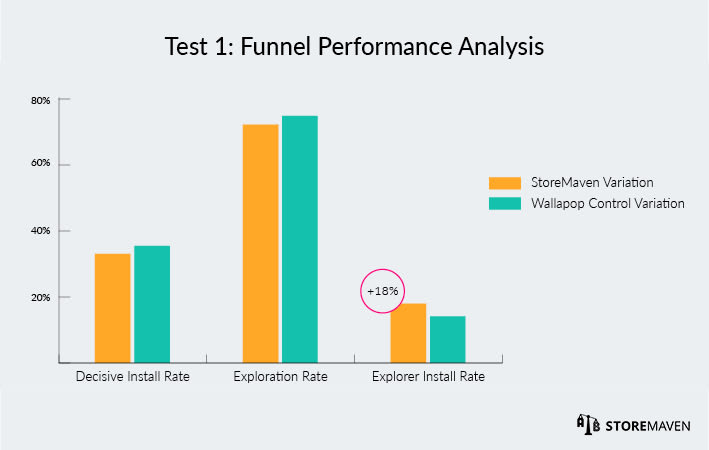 As depicted in the graph above, Wallapop’s Control Variation encouraged more users to explore, but it was not successful at encouraging those users to install. The redesigned StoreMaven Variation created a more optimal exploration journey that led to a greater number of installs. 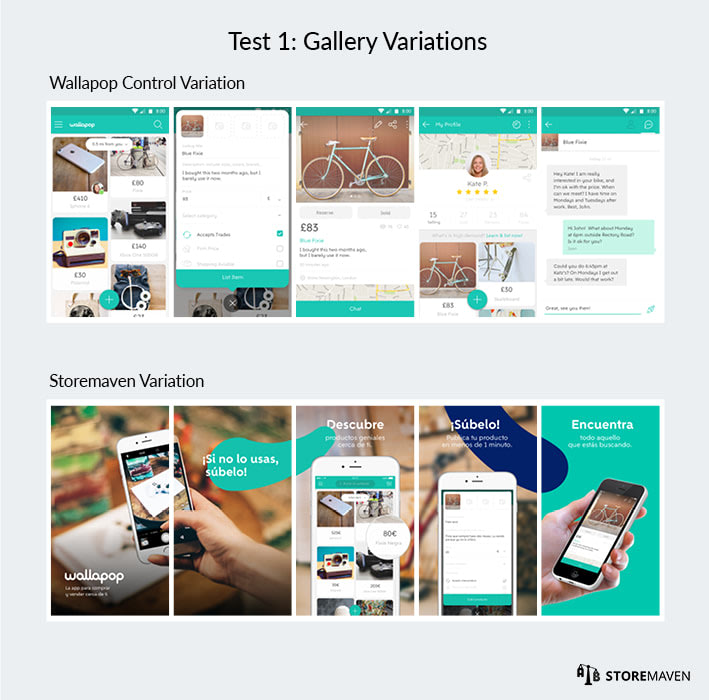 The Gallery is the most significant asset that Explorers engage with. Hence, in order to draw actionable insights from Test 1, we sought to answer three main questions about Explorers with data from the first test.

The low Explore & Install rates seen in Wallapop’s Control Variation is a clear indication that the Gallery did not meet the expectations of the common Exploring Visitor.

Based off millions of tests we have run on the App Store, we are able to conclude that when users click on a screenshot in the Gallery, it comes with a high chance that the visitor will drop (i.e. negative correlation with installing the app). Therefore, by analyzing the click-to-enlarge rate of each screenshot in the Gallery, we are able to identify unhealthy user behavior patterns and further pinpoint the cause. 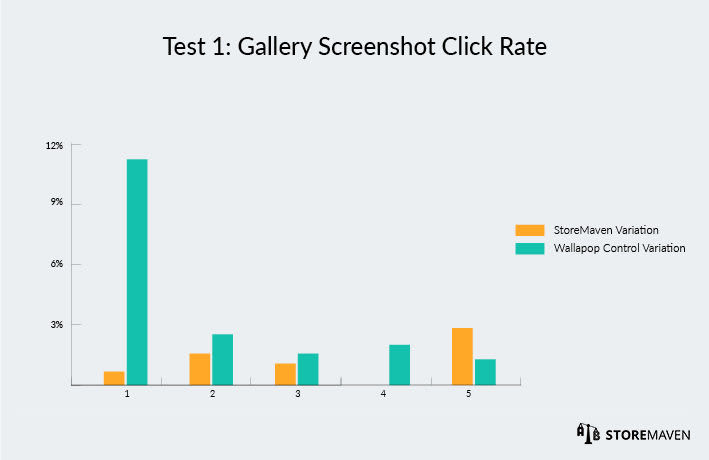 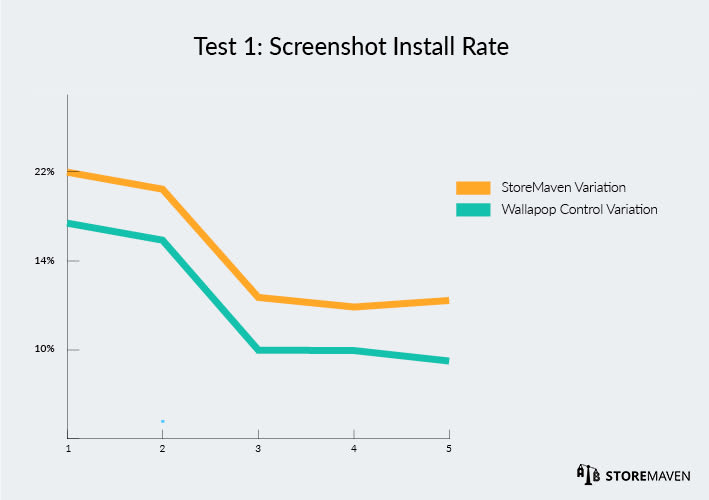 Insights for the Next Test

There are several insights we can draw from the results of Test 1. 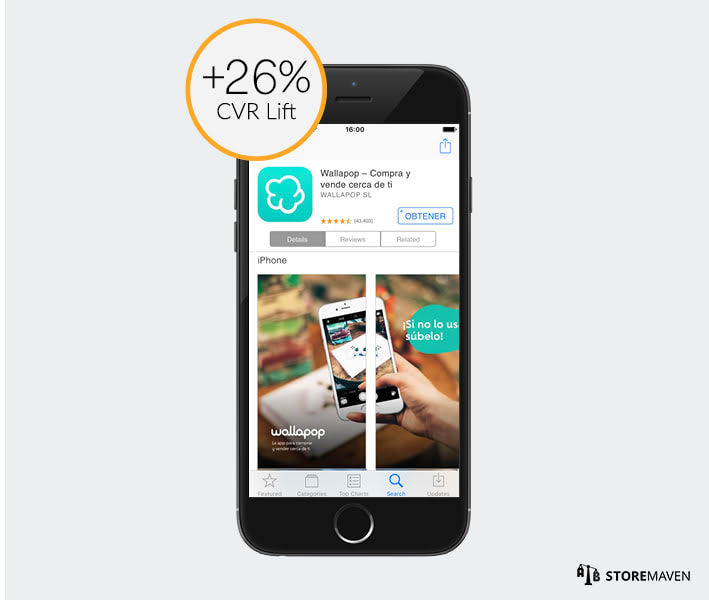 The goal of the second test was to optimize Wallapop’s App Store Product Page by implementing insights from the first test while testing new messaging. More specifically, we saw that in Test 1, we were highly successful at converting Exploring Visitors, so we wanted to increase the Exploration rate in order to convert more Exploring Visitors. We also wanted to increase the Decisive CVR, which was unaffected in Test 1. 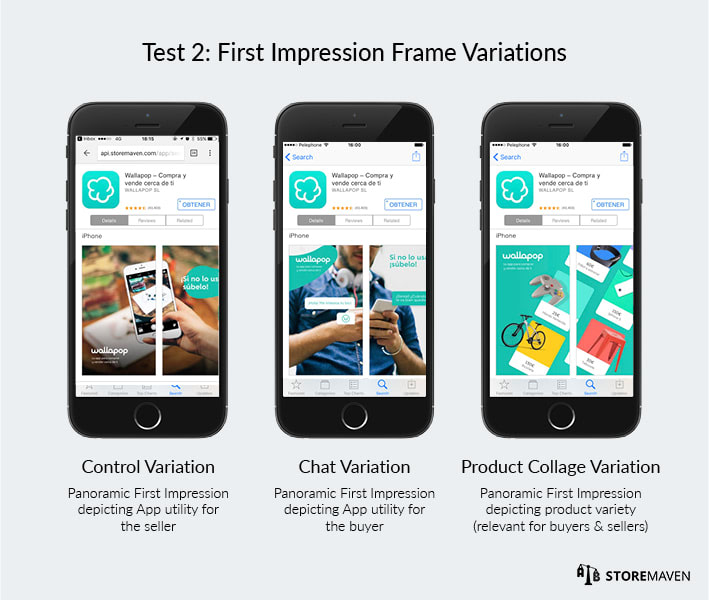 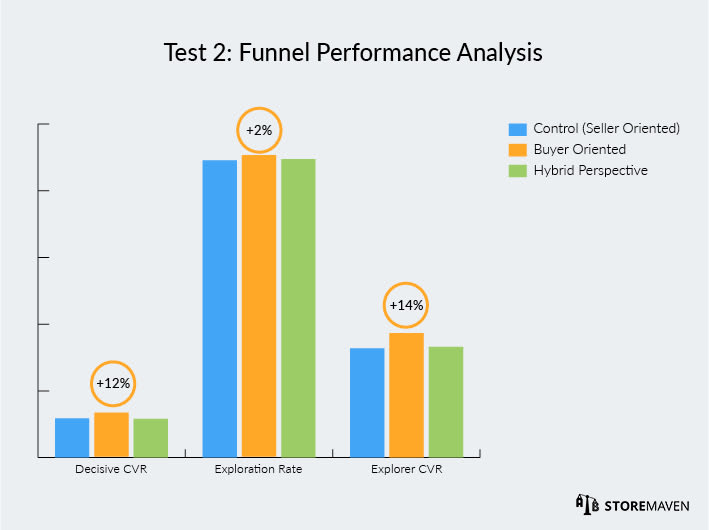 In order to more thoroughly analyze the Decisive CVR, we further broke down these figures by iPhone screen resolutions (small screens and big screens). By doing so, we were able to find points of failure. 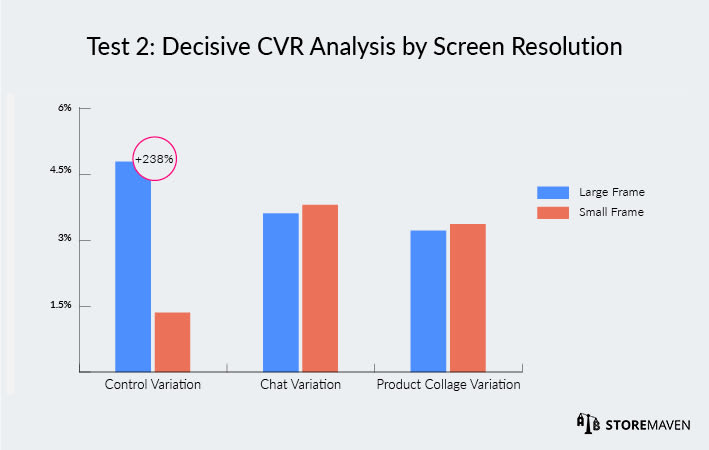 Changes seen to the First Impression Frame for the Control Variation on small screens: 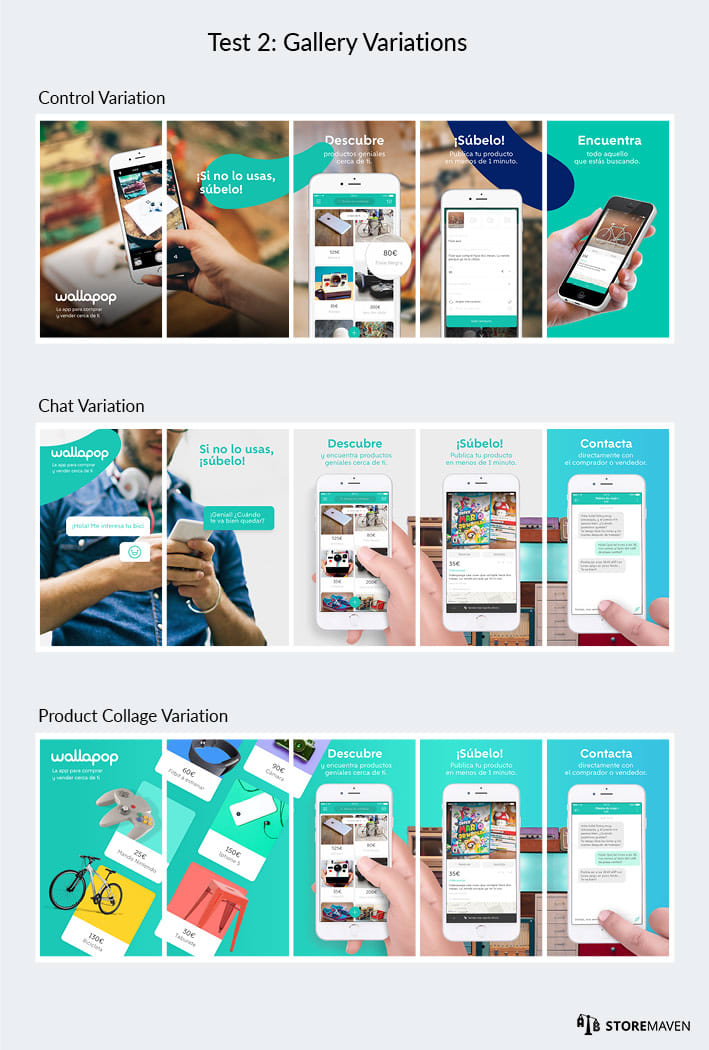 When we looked beyond the First Impression Frame and analyzed overall Gallery performance, we saw that the Chat Variation also outperformed the other variations in every screenshot. 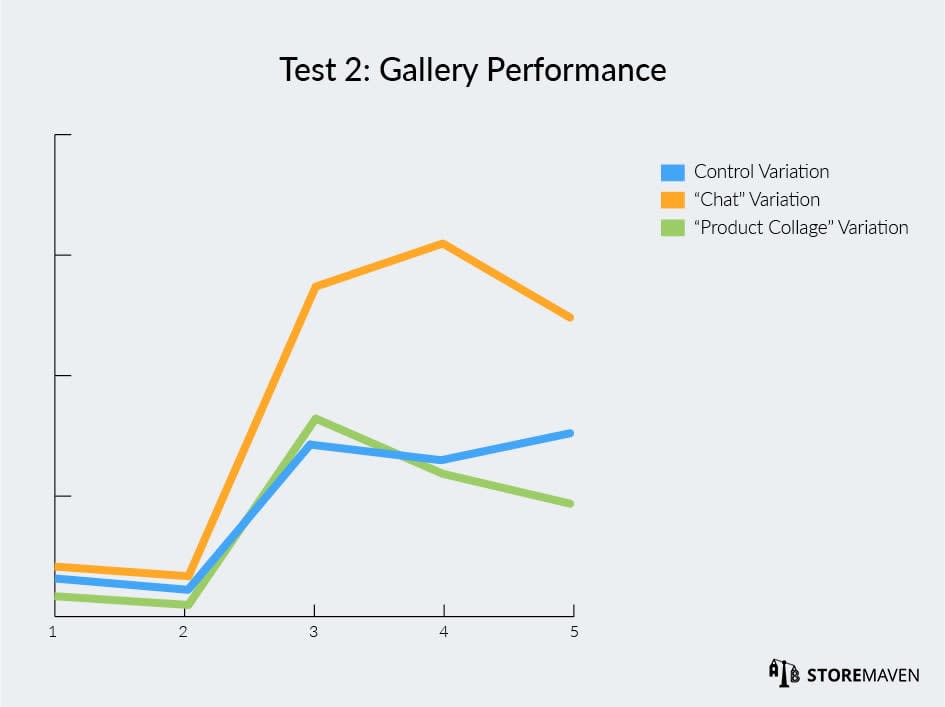 Not only did the Chat Variation have the highest CVR for each screenshot but it also had the sharpest increase throughout the Gallery.

Insights for the Next Test

There are three major insights we drew from the results of Test 2. 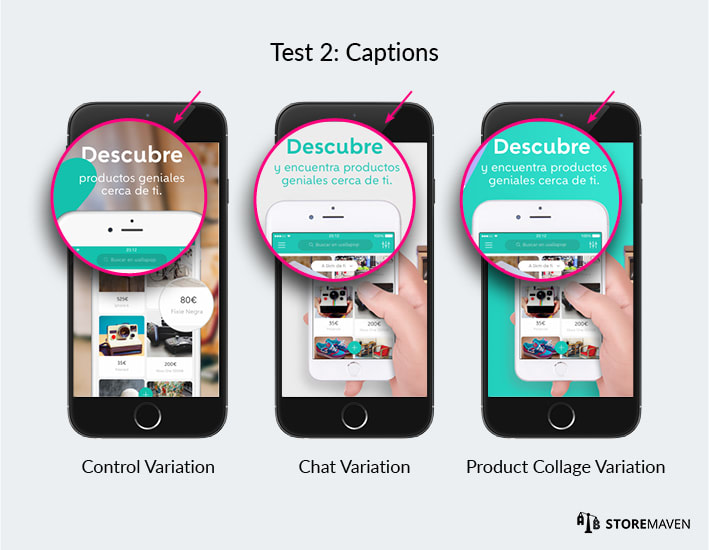 Notice in the image above how the contrast between the caption and the background can affect readability. The easier designers make it for App Store visitors to read the captions, the greater the chance visitors will actually read and understand the Gallery storyline. The Chat Variation had the best contrast, which is one reason that variation enjoyed the highest CVR per image.

We have seen through various tests that visual repetition often leads to higher drop rates. 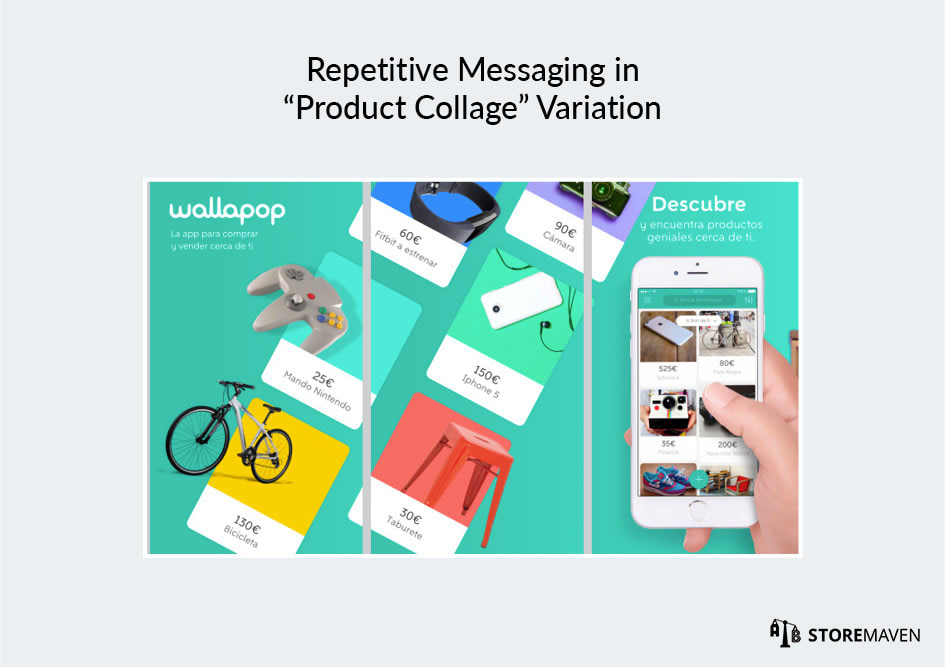 Notice how the messaging in the first two screenshots shows a variety of products you can find on the app, and the third screenshots repeats this messaging by using UI imagery.

The Product Collage Variation had repetitive messaging in the first three screenshots, and this is likely why those screenshots suffered a decrease in CVR.

It is highly important to keep a coherent message throughout the first three screenshots in order to enjoy the highest Explorer CVR. Remember, if a user scrolls past the First Impression Frame, this action is triggered by the contents found in the First Impression Frame, and that visitor expects to find relevant information as they explore the page further. As previously mentioned, both the Control Variation and the Chat Variation used the First Impression Frame to describe app utility (i.e. the Control Variation catered to sellers and Chat Variation catered to buyers). Since the caption in the third screenshot reads “discover and find genius products near you,” this messaging helped create a coherent storyline. This explains the higher performance. 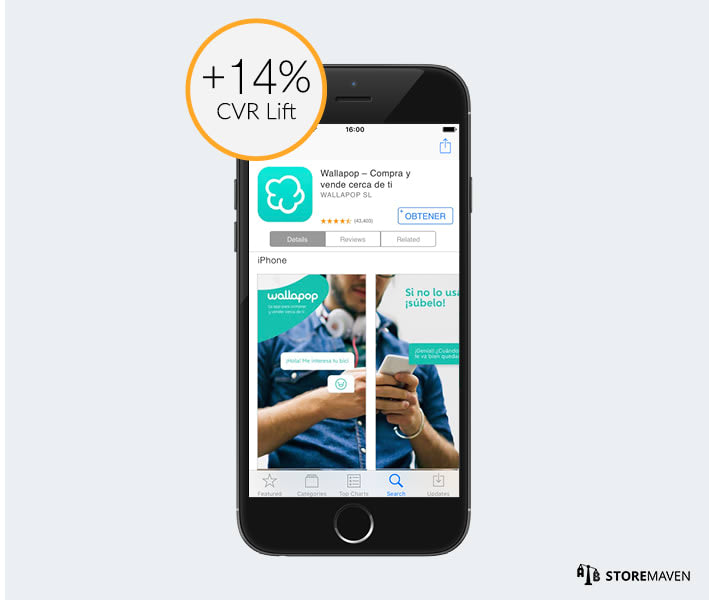 App Store Optimization is a never-ending process. Hate to break it to you, but your mother was right!

Each test points to new elements that encourage and discourage App Store visitors, and these insights should be taken into consideration for each subsequent test. Also, people and industries change over time. What works well today will not necessarily work well next month. So, what’s next?