Some say crafting a good App Store page is an art, but we say it’s a science.

As marketers, there’s a lot you can do to improve your app page conversion rate (CVR) on the Apple App Store and Google Play. Designing the right creative assets, delivering the most relevant messages, and matching user expectations are crucial to mastering your App Store Optimization (ASO) strategy and can be accomplished through testing.

Based on our analyses of over 500M app store user sessions, here are some best practices for creating a more optimized app store page.

1. An Optimized First Impression Frame Can Increase CVR By Up To 26%

The First Impression Frame (everything above the fold) matters most.

You have roughly 3 seconds to explain to visitors what your app does. In those few seconds, visitors will exhibit one of two behavior types.

The key is to focus on optimizing the most dominant marketing assets in the First Impression Frame of each app store. 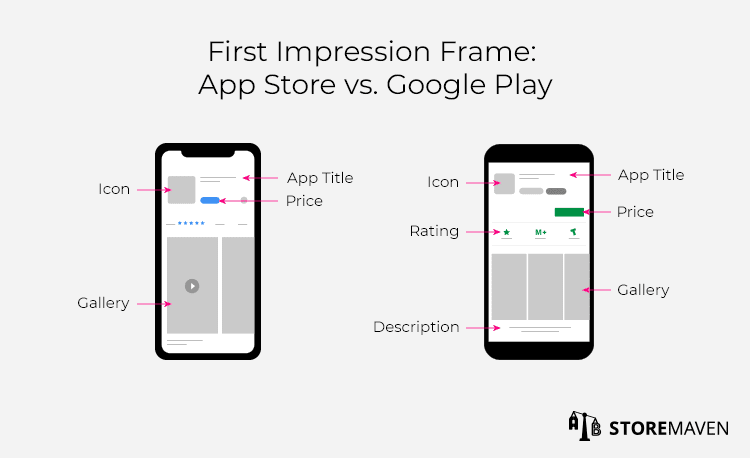 *Please note that Google is rolling out an updated App Listing design, which will affect the First Impression Frame in the Google Play Store. You can learn more about how this update will impact your ASO strategy here.

This leads to our second tip…

2. Use Different Creatives on Each Platform 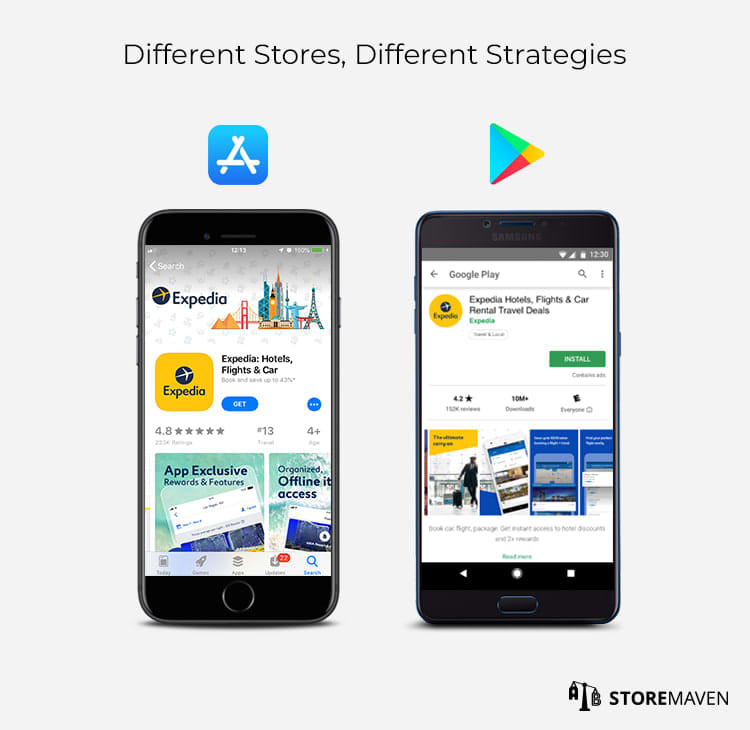 It’s important to realize that what works on the Apple App Store does not necessarily work on Google Play—and vice versa. Why?

For those reasons, it’s essential to avoid a “one size fits all” approach to app store marketing. In fact, we’ve found that using the same creatives on both platforms can actually lead to a 20%-30% decrease in installs on iOS.

In the iOS App Store, the App Preview Video is on autoplay, which means that a majority of Product Page visitors are exposed to the video. The average video watch time among all app categories is only 4–6.5 seconds, so be sure to explain your app’s main value propositions in the first 3 seconds.

In Google Play, the Video is not on autoplay, and only 6% of visitors actually play it. However, Google is expected to roll out a new Store Listing design in which the Feature Graphic will be removed entirely, and videos will be moved to the Gallery. The removal of the Feature Graphic will place more prominence on the Gallery in the First Impression Frame. StoreMaven tests show that the video watch rate increases significantly on the new Google Play design.

Our data shows that Videos can significantly boost CVR if done correctly. Here are some tips:

Testing your Screenshots can increase CVR by up to 28%. In fact, our data shows that leading mobile publishers test their Screenshots at least once a month. One type of test we recommend is optimizing the orientation of your Gallery since it impacts what visitors see when they land on your page.

On both stores you have the option of having a landscape, portrait, or hybrid gallery orientation. For a detailed explanation and visual guide, refer to this infographic.

Each orientation comes with advantages and disadvantages. Landscape orientation allows you to focus on one key message while portrait orientation enables you to display multiple messages or unique selling propositions in the First Impression Frame. Testing is required to determine which orientation works best for your specific app and visitors.

5. Find A Screenshot Design Strategy That Works For Your App

In addition to gallery orientation, you should also test the design strategy of your Screenshots. 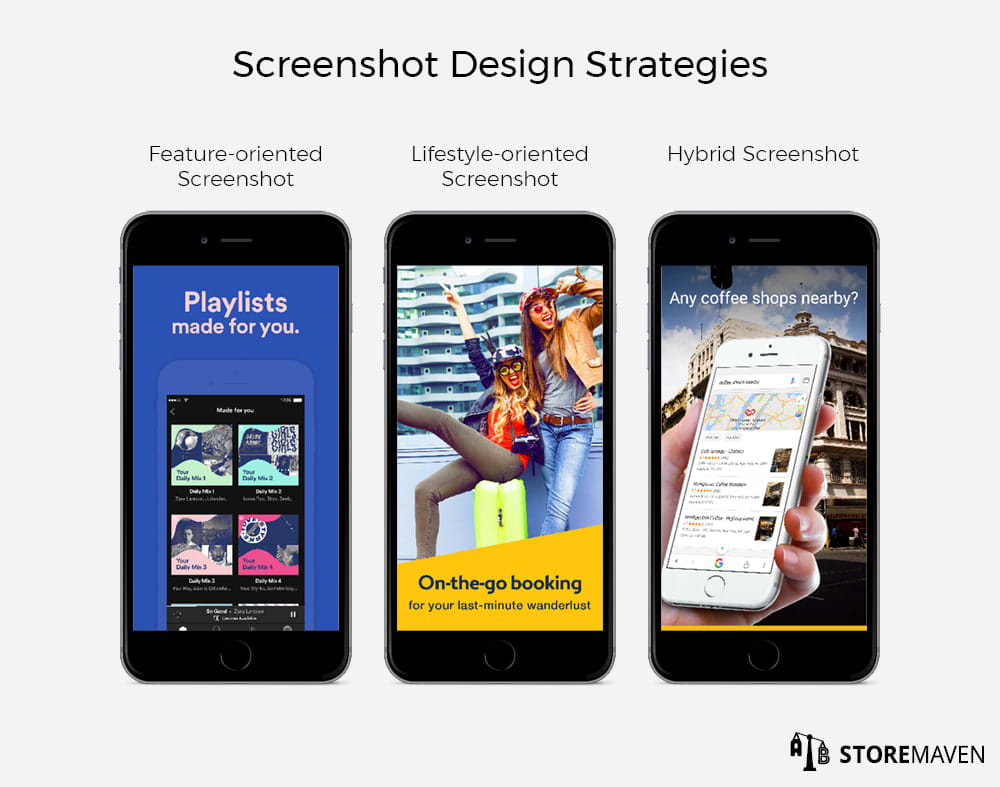 As with gallery orientation, you should test different design strategies to see which strategy has the highest impact on your CVR.

For more information on Screenshot design strategies read this, this, and this!

If visitors see the same message twice, they’ll think that’s all there is to see and will immediately drop from your app store page without exploring further. Our data has shown that repetitive messaging can greatly influence instant drop rate across both the Apple App Store and Google Play.

Show Decisive and Exploring Visitors unique messages and concepts that will encourage them to stay and install. 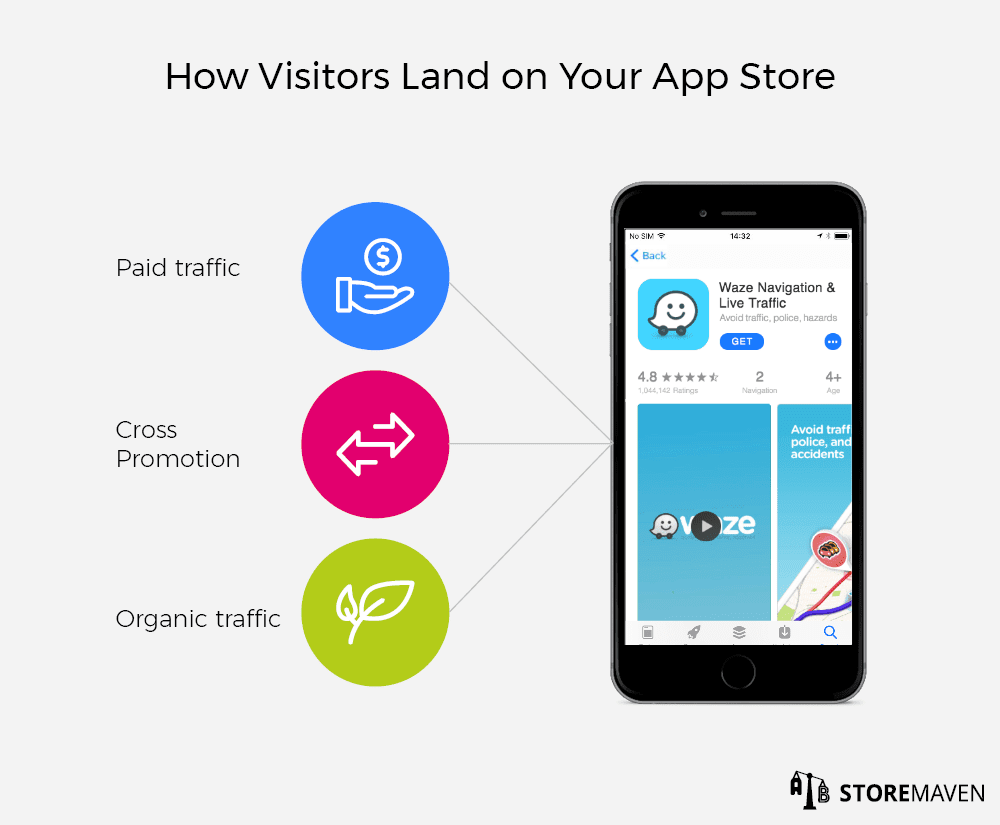 With the update to App Analytics on iTunes Connect (now referred to as App Store Connect), you can now pinpoint which traffic sources are driving users to your Apple App Store Product Page. This enables you to identify the hidden potential of a certain traffic source and better optimize your marketing and UA campaigns.

Here’s a quick look at the potential impact of ASO across different traffic sources: 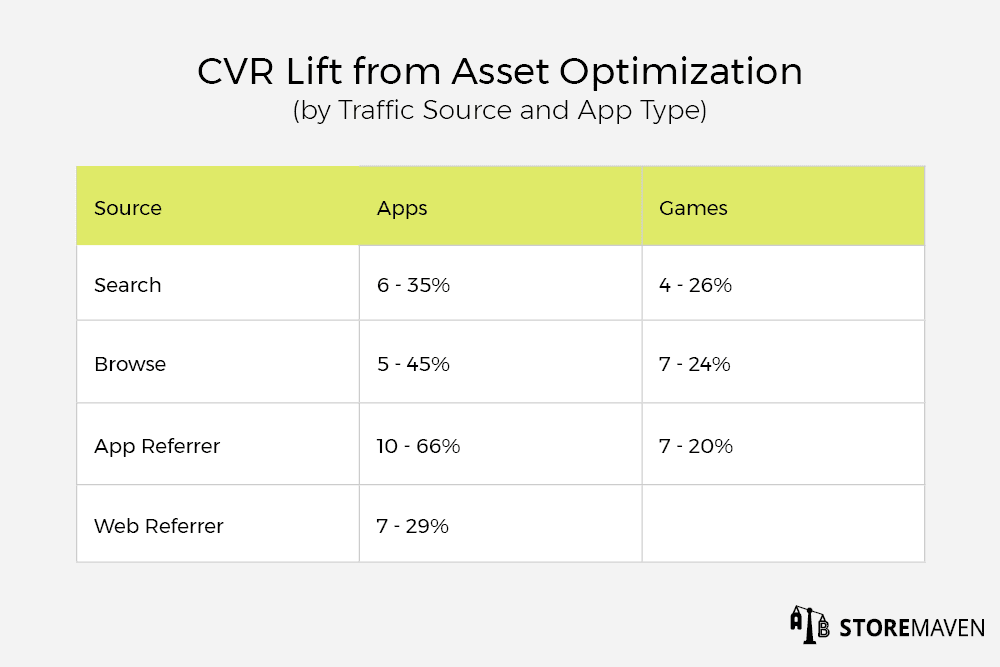 To take advantage of these new analytics, you should monitor the impact of any new Product Page versions you push to the live store. If you’d like to learn how to use iTunes Connect to measure your ASO efforts, read the full guide.

In the past, Google only allowed you to separate organic traffic (i.e., search and browse traffic) from paid traffic in your Play Console analysis. However, Google recently announced an update to the Play Console’s acquisition report that will enable you to isolate search from browse—essentially leveling the playing field with Apple. This is crucial for identifying your biggest growth opportunities and determining which channels to optimize.

What works in one country doesn’t necessarily work in another. It’s important to be aware of language differences and effectively market your app in each regional store by translating to the local language. 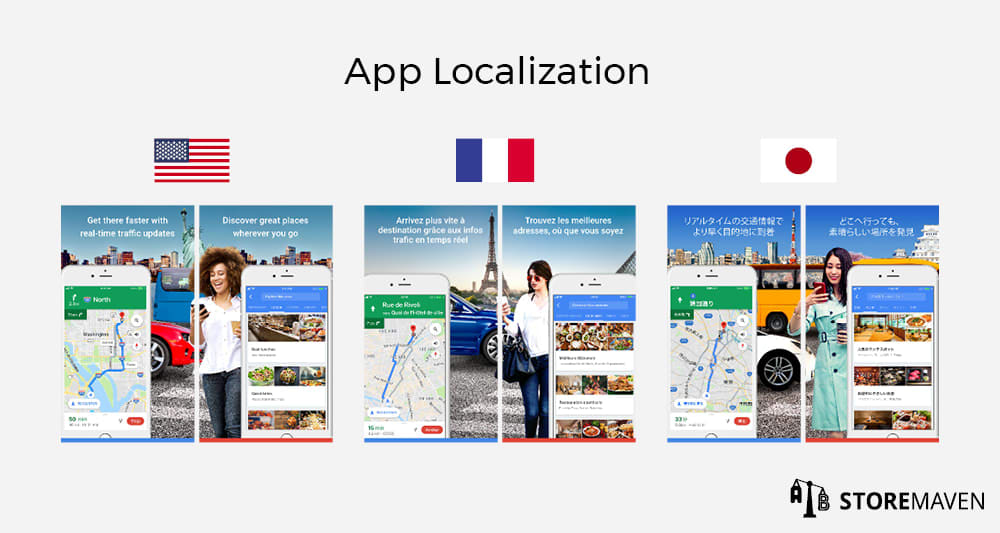 In the Google Maps example above, you can see localized app stores for the United States, France, and Japan. Notice how they use the same messaging, features, and design but in different languages, and with different models and cities.

Localization is the process of adapting an app store to different countries and their languages.

Our data shows that among the top gaming apps, the CVR lift gained by localizing app stores reached up to 26%. For best practices on localizing your app, read this.

Localizing your app is important, but you shouldn’t stop there. It’s crucial that you also make culturally informed design choices so your app matches the preferences and culture of the regions you want to target. 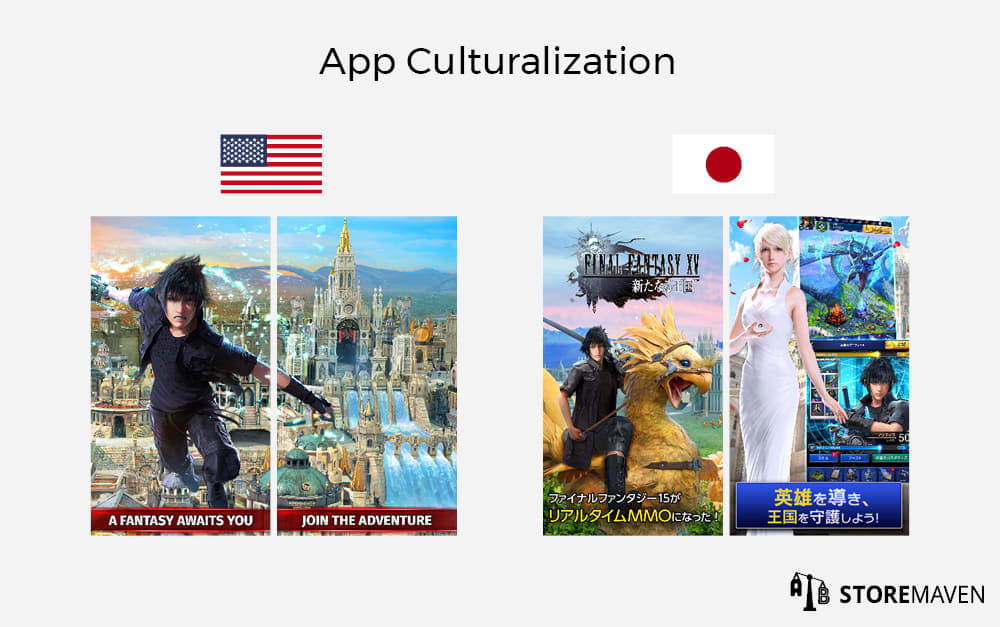 In the Final Fantasy example above, they showcase completely different elements in the United States store compared to the Japan store.

Culturalization is the process of optimizing the messages you’re showing to different regions based on their unique values and behaviors.

The App Store and Google Play are dynamic. What works now might not work next month, which means you should be testing frequently in order to learn and evolve with the market.

Now that you know our top 10 ASO tips, you’re ready to put them to the test!